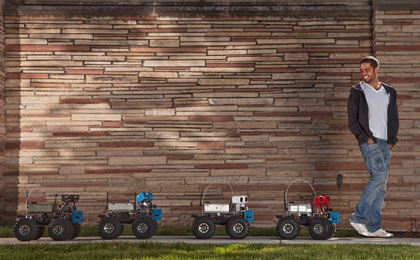 The Institute was launched in November of 2012 to:

Posted in Featured | Comments Off on Welcome

Posted in News | Comments Off on PhD defense – Steve Conyers

Ground effect refers to the apparent increase in lift that an aircraft experiences when it flies close to the ground. For helicopters, this effect has been modeled since the 1950’s based on the work of Cheeseman and Bennett, perhaps the most common method for predicting hover performance due to ground effect. This model, however, is based on assumptions that are often not realistic for small-scale rotorcraft because it was developed specifically for conventional helicopters. It is clear that the Cheeseman-Bennett model cannot be applied to today’s multirotor UAVs. Experimental findings suggest that some of the conventional thinking surrounding helicopters cannot be applied directly to rotorcraft using fixed propellers at variable speeds (e.g. multirotors), and it is necessary to adjust the helicopter models to better reflect the differences in such aircraft.

Likewise, ceiling effect refers to the apparent increase in lift that a rotorcraft experiences when flying close to a ceiling or any similar surface that is present above the rotor(s).Ceiling effect is similar in principle to ground effect, and can be explained using a similar equation. Ceiling effect, however, was never explored in detail for conventional helicopters because large manned aircraft do not operate in enclosed spaces.

Wall effect is the phenomena that occurs when a rotorcraft flies near a vertical wall, and has the tendency to pitch towards the wall and be drawn into it. Wall effect is the least-understood of these three areas of interest. Wall effect has not been explored in great detail for any aircraft, and is addressed in detail in this dissertation.

The recent widespread use of small-scale UAVs and the demand for increased autonomy when flying in enclosed environments has created a need for detailed studies of ground effect, ceiling effect and wall effect. Ultimately, this work provides foundations for the development of an improved UAV flight controller that can accurately account for various aerodynamic disturbances that occur near surfaces and structures to improve flight stability.

Posted in News | Comments Off on PhD defense – Konstantinos Kanistras

Posted in Research | Comments Off on Circulation Control Wing for UAVs